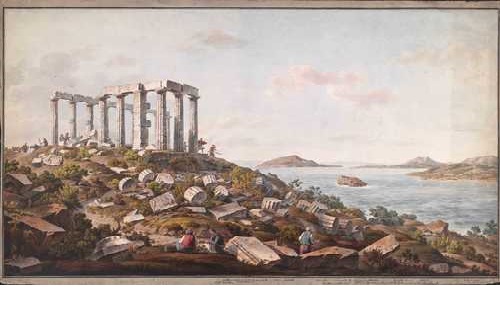 The “ideal” realist artwork, one which pictured images of the past as tangible, fundamental truth transpired from the pictorial scenarios by Dodwell and Pomardi. Closely acquainted with the classical training of an English gentleman, Edward Dodwell (1777/78–1832) first traveled through Greece in 1801. He returned in 1805 in the company of an Italian artist, Simone Pomardi (1757–1830), and together they toured the country for fourteen months, drawing and documenting the landscape with exacting detail. They produced around a thousand illustrations, most of which are now in the collection of the Packard Humanities Institute in Los Altos, California.

Dodwell and Pomardi frequently used an optical device, the camera obscura which made it easier to create accurate images. Beyond providing evidence for the appearance of monuments and vistas, their illustrations manifest the ideal of the picturesque that fascinated so many European travelers. The sight of ancient temples lying in ruin, or of the Greek people under Turkish rule as part of the Ottoman Empire, stimulated meditation on the transience of human achievements. As Dodwell himself wrote:

“When we contemplated the scene around us, and beheld the sites of ruined states,

and kingdoms, and cities, which were once elevated to a high pitch of prosperity and

renown, but which have now vanished like a dream . . . we could not but forcibly feel

that nations perish as well as individuals.”

Dodwell’s descriptions are drawn from his Classical and Topographical Tour through Greece, during the Years 1801, 1805, and 1806 (London, 1819). Dodwell and Pomardi traveled widely in Greece. They began their 1805–6 trip in the west and crossed the center of the country before arriving at Athens. They resided there for over seven months, making occasional excursions, followed by Dodwell’s three-month journey around the Peloponnese (which Pomardi had to miss, owing to a fever). Their all-encompassing interests led them to pause and draw at numerous locations, including many ancient sites that continue to attract visitors today. Some were already well documented, while others were not yet fully excavated or were still awaiting discovery . In their writings, both Dodwell and Pomardi were keen to record the particularities of both Greek and Turkish customs, and they devoted just as much attention to delineating mosques, monasteries, and villages as they did to classical sites. Yet the landscape was so captivating to Dodwell because it was suggestive of antiquity, and his passion for Greece was primarily for its glorious past.The primary value of that Grand Tour for  Dodwell and Pomardi , laid in the exposure to the cultural legacy of classical antiquity of Greece. The painting of phantasmic simulacra,  the representation of icons from the Past.