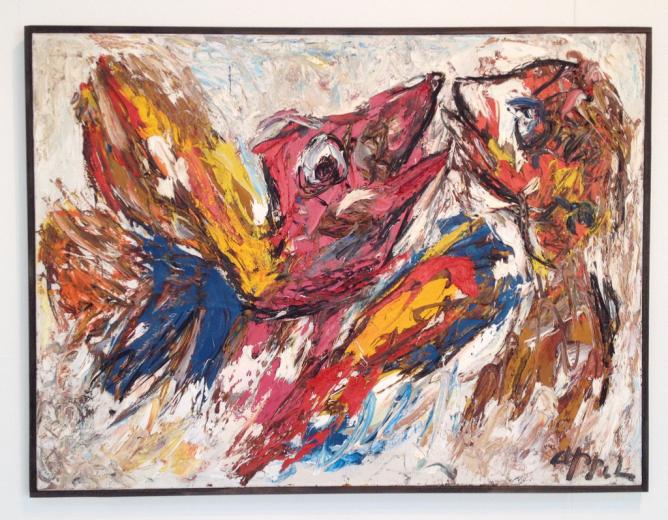 Rome Foundation Museum-Palazzo Cipolla is organizing an exhibition concernig the CoBrA group (1948-1951) – an acronym formed from the initial letters of the capitals of the countries of origin of the artists: Copenhagen, Brussels, Amsterdam – the first major international post-war avant-garde , emphasizing, through an in-depth  historical-critical focus, the extraordinary European vocation of this transnational movement.

Cobra. A great European avant-garde (1948-1951) is the title of the exhibition, sponsored by the Rome Foundation and organized by the Fondazione Roma-Art-Museums in collaboration with DIE GALERIE Frankfurt. The exhibition has been organized by Damian Femfert and Francesco Poli and offers a wide and accurate collection of paintings, sculptures, works on paper, publications, documents and photos, testifying to the activities of the leaders of the movement, including Jorn Pedersen, Dotremont , Appel, Lucebert, Corneille, Alechinsky, Götz, Constant. The manifesto of CoBrA Movement, entitled “La cause était entendue” (The Case Was Settled) was written by CoBrA member Christian Dotremont and signed by all founding members in Paris in 1948. It was directly speaking to their experience attending the Centre International de Documentation sur l’Art d’Avant-garde in which they felt the atmosphere was sterile and authoritarian. It was a statement of working collaboratively in an organic mode of experimentation in order to develop their work separate from the current place of the avant-garde movement. The name of the manifesto was also a play on words from an earlier document signed by Belgian and French Revolutionary Surrealists in July 1947, entitled “La cause est entendue” (The Case Was Settled).

One hundred and fifty works are on exhibition in Rome from 3rd December 2015 to 3rd of March 2016 coming from the leading European museums and collections : Stedelijk Museum, Amsterdam; CoBrA Museum in Amstelveen; Centre Pompidou, Paris; Peggy Guggenheim Collection in Venice; Statens Museum for Kunst in Copenhagen; GAM-Civic Gallery of Modern and Contemporary Art in Turin; Kunstmuseum in Ravensburg; Stedelijk Museum in Schiedam, in addition to DIE GALERIE Frankfurt, historical gallery of the group and the private collection and archive of Pierre Alechinsky, last living exponent of the movement along with Karl Otto Götz. The exhibition gives the opportunity to discover and understand the parallels between the works of the group, who pursued a poetics centered on meeting the spontaneity and  virulence  of the artistic act, and those of the main European trends, contributing to the development of a libertarian culture capable of overcoming nationalist barriers and exert a strong influence on contemporary art.