From December 4th , 2015 to 8th of  May 2016 a major exhibition devoted to Toulouse-Lautrec, the painter of bohemian Paris of the late nineteenth century will take place  at the Ara Pacis Museum in Rome. This exhibition traces back  the life of the artist from 1891 to 1900, shortly before his death at only 36 years.

Rome is going to receive for this important exhibition the collection of works by Toulouse-Lautrec of the Museum of Fine Arts in Budapest (Szépművészeti Múzeum), one of the most important in Europe.

Henri de Toulouse-Lautrec-Monfa was born  in 1864 into one of the most important and oldest aristocratic families in France, in the southern town of Albi. The artist, who suffered from a rare genetic disorder, demonstrated his talent for drawing at a very early age, thus allowing him to study at the Parisian studio of Fernand Cormon,  a noted painter of the day, along with fellow students Émile Bernard, Loius Anquetin and Vincent van Gogh. In 1884 he moved to Montmartre, the bustling world of which became both his home and the chief inspiration for his works. He had no desire for prizes or recognition but he did regard it as important that his works should be accessible to as many people as possible and was, therefore, happy to have them published in newspapers. From this point on he passionately made lithographs, producing some 360 pieces, of which thirty were posters . For Lautrec his paintings and lithographs were of equal importance: at his exhibitions he almost always displayed his paintings, posters, lithographs and drawings together . He devoted great care to the execution of his lithographs and implemented every detail with utmost care. The museum of Budapest has around 240 works by Lautrec; such comparably rich holdings are only found in Europe in the Bibliothéque Nationale in Paris, the Gerstenberg collection in Berlin as well as the public collections of prints and drawings in Berlin and Dresden. The Museum of Fine Arts’ famous Lautrec painting, These Ladies in the Refectory , entered the collection in 1913. The collection of the Department of Prints and Drawings provides a comprehensive survey of Toulouse-Lautrec’s graphic oeuvre in regard to both their functions (posters, illustrations for books and periodicals, cover designs, theatre programmes and cast lists and covers for sheet music) and themes. 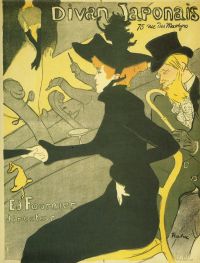