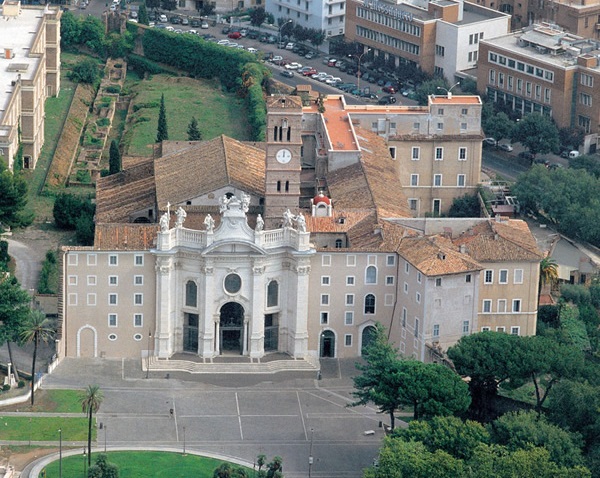 was in the first half of the third century the site of an imperial villa, whose building started under Lucius Septimius Severus Augustus ( Leptis Magna, 146 A.D – Eboracum  211 A.D) and which was fulfilled by Heliogabalus (c. 203 – March 11, 222).  The gorgeous  building included the residential palace, the Sessorianum, and, as it often happens in large villas, a reserved area for amusement, as evidenced by a small circus and an amphitheater, amphitheater Castrense. At the beginning of the fourth century the Palatium Sessorianum became the private residence of the Empress Helena, mother of Constantine the Great ( c. 272 A.D – 22 May 337 A.D ), that most likely was devoted  to the Christian cult. A  few decades later her mansion was transformed into a Christian basilica, hence the names of Eleniana or Basilica Sessoriana. The Basilica houses the rests of the Holy Cross of Christ that Elena would have brought to Rome from the Holy Land, in addition to the dry land of the Calvary, which was spread under the floor of the building, hence the name “Jerusalem”.