Strolling through the city’s side streets of downtown Rome it’s possible to discover Caravaggio paintings for free. The Church of St. Louis of the French was erected in 1518 to receive the increasing French comunity in Rome, who by the end of the 15th century had only a small chapel and a hospital devoted to Saint Louis close to Sant’Andrea della Valle. The Church was the Seat of the cardinal of Paris in Rome.

The Church San Luigi dei Francesi contains three marvelous paintings by Michelango Merisi, known as Caravaggio. It represents also the rising of Roman baroque art. Thanks to the endorsement of Giulio dei Medici (afterwards, Pope Clemens VII) the construction of a new church started and it was built by Domenico Fontana following a project by Giacomo Della Porta. The Church was finished on 8th October, 1589 when the Church of St. Louis of the French was consecrated. From an artistic point of view, the church is an exaltation of France through the representation of its saints and the most important historical characters, from the facade that hosts the statues of Charlemagne, St Louis, Saint Clotilde and St. John of Valois.

The interior, divided into three naves with five chapels on each side and a rich central choir decorated with marbles, is a true jubilation of baroque art. What is interesting is the striking art by Caravaggio, nickname of Michelangelo Merisi (1571-1610), a painter from Lombardy son of an architect. In his years of traineeship Caravaggio moved from the experiences of the Lombard-Venetian painting, especially by artists such as Giovan Gerolamo Savoldo or Giovan Battista Moroni, in which already appears a color-light effect control which is quintessential of Caravaggio sensitivity. In 1593 Caravaggio arrived in Rome and remained there until 1606.

In these thirteen years in Rome, the artist developed his great intellectual and aesthetic sensibilities which led him to be one of the major artists of all European painting of the seventeenth century and beyond. Incredibly, some descriptions of this church fail to mention that it contains three of the greatest and most influential paintings ever produced in Italy. Perhaps this has to do with the shadowy life of the man who painted them, Caravaggio, who later killed a man and spent the last four years of his life runaway . The artist Cavalier D’Arpino obtained a commission to decorate the chapel for the French Cardinal Matteu Contreil (in Italian, Matteo Contarelli).

Caravaggio was working as an apprentice for D’Arpino at the time, and when D’Arpino became too busy to bring to an end the decoration, Caravaggio’s patron, Cardinal Francesco del Monte, helped him to get the commission . The renowned Contarelli chapel preserves the famous triptych by Caravaggio composed of the Martyrdom of St Matthew, the Calling of St Matthew and St Matthew and the Angel . It is well proved that the first painting that Caravaggio realized was that of the Martyrdom of St Matthew. After several efforts Caravaggio made this masterpiece. Compared to other works, this is more crowded with a tangle of bodies that refers to the Mannerism while the nudes are clearly inspired by Michelangelo’s works. 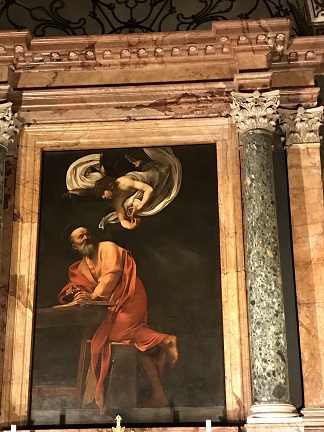 In the Calling of Saint Matthew, the main attention is represented by the symbolism of the beam of light that comes from a hidden window. Indisputably the picture with the “vocation” of St. Matthew is the more fulfilled . The light has a highly symbolic value. Its strength is such that the open window on the opposite wall does not radiate any light. If this window does not give off light because it is night, even more so the light from the right that illuminates the environment has a purely symbolic value. It is the light that God turns toward Saint Matthew.

At the time of the calling by Jesus, Matthew was a tax collector and the meeting with Jesus lead him to abandon his life for him. Caravaggio transformed this episode in a scene of his time with the environment that resembles a typical tavern in Rome. His painting gets an increasingly dramatic character, made of lights and especially shadows. A persistent realism that wants to suggest that the sacred does not have a location distant in time and space, but it is always present among people.

In the second version of the painting “St. Matthew and the Angel” , the first was lost in Berlin during the second world war and only remain some photographic copies, Matthew is always shown composing his Gospel with the angel providing some tips. We can only be fascinated by the expressive force and by the beauty of these works, which represent an important turning point in the style of the great artist. Caravaggio had never worked on such large canvasses before, and X-rays disclose he reworked the paintings a number of times.  (Carlo MARINO)