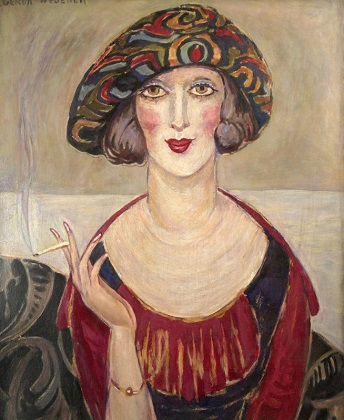 In the wake of the Oscar-winning film “The Danish Girl” and the fantastic Gerda Wegener exhibition at Arken Museum of Modern Art in Denmark it’s interesting to remember Einar Wegener/Lili Elbe was one of the first persons in the world to undergo sex reassignment surgery and was thus in many ways a pioneer within the history of gender identity. Lili Ilse Elvenes, better known as Lili Elbe (28 December 1882 – 13 September 1931) was a transgender Danish painter.The story of Wegener/Elbe is both compelling and tragic because the journey from man to woman ultimately proved fatal.

Einar Wegener was trained as a landscape painter, while Lili Elbe was primarily a muse and model for the wife Gerda Wegener’s portraits. In 1912 the couple moved from Denmark to the more open-minded Paris, where Elbe could live openly as a woman.

Einar Wegener often found his inspiration in Versailles’ lavish park area, in the picturesque Luxembourg gardens or from travels to the island of Capri and similar places.