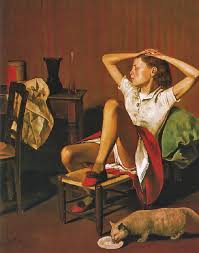 There are two exhibitions in Rome concerning Balthus at the moment: one in Scuderie del Quirinale and the other in Villa Medici, i.e. the Academy of France in Rome. Balthasar Klossowski de Rola,  alias Balthus was director of the Academy of France in Rome. Since he was a baby, Balthus was in contact with the world of painting. Being the son of the art critic Eric Klossowski and of Baladine, a watercolor painter, he had the opportunity of meeting at home Cézanne, Matisse, Mirò, Masson and so on. He was a self-taught person  and his major models were Masaccio and Piero della Francesca whose works fascinated him since 1926. He made a series of paintings concerning watercolor landscapes in the Twenties inspired by the Tuscan artists. His most controversial works, however, are related to childhood. The cat, Alice in Wonderland , the images of childish eroticism and the Japanese art were the issues that most inspired him. Looking at his paintings one is charmed because , deep behind the inconsistent moralistic criticism,   Balthus is one of the most important artists of the twentieth century in Europe.