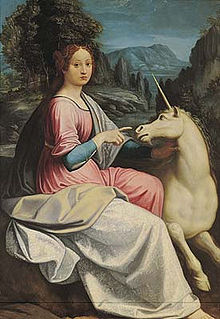 A young lady, immersed in a peaceful landscape sits next to a unicorn, addressing the audience. She points the finger towards the animal, openly inviting us to observe, while this turns its gaze. It is probably Giulia Farnese, influential sister of Pope Paul III, portrayed here as the Virgin with the unicorn. The Unicorn was symbol of purity and was the emblem of the Farnese family over two generations. The artist  is  Luca Longhi, who was strongly influenced by the manner of Leonardo’s concept of light, especially in landscapes as a backdrop to his figures.  What seems to be certain is that the composition is taken from a drawing by Leonardo preserved in the Ashmolean Museum in Oxford  “Maiden with a Unicorn” (c. late 1470s).

Maiden with a Unicorn has been attributed to Luca Longhi from Ravenna (1507-1580),but according  to others, the author of the work would be the painter’s daughter, Barbara, of which little is known. As a mannerist Luca Longhi is notable for its intellectual sophistication favoring compositional tension and instability rather than the balance and clarity of earlier Renaissance painting. .

Mannerism is a period of European art that emerged from the later years of the Italian High Renaissance around 1520. It lasted until about 1580 in Italy, when the Baroque style began to replace it, but Northern Mannerism continued into the early 17th century.